These Sights Are Off! 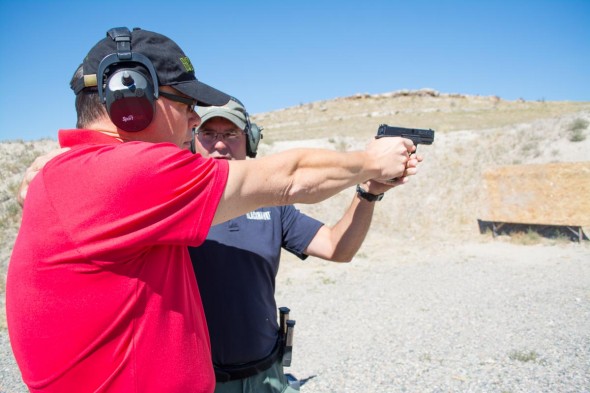 Pro shooter, instructor and all around swell guy, Todd Jarrett proves to me that the sights are in fact, fine.

A couple of years ago, I was assistant coaching a youth Steel Challenge team. Every other week or so, we would get a new shooter or two, usually between the ages of 12 and 16. One week, I had a new young man, about 15 years of age as I recall. To protect the innocent, but exceptionally confident, let’s just call him Frank “Ponch” Poncherello.

Anyway, after taking Ponch through a pretty comprehensive safety briefing on the four rules and safety procedures at our range, it was time to get Ponch shooting. He had shot guns before, including pistols, so we went straight to the team’s Springfield Armory XD 9mm. Yeah, it’s a nice gun and certainly not known for accuracy problems.

After unloading at steel plates for a couple of magazines, Ponch turned to me and said, with a serious straight face, “the sights on this gun are off – it’s shooting low and left.”

Ponch’s casual observation took me back to 1999 – the year before all the ATM’s started spitting out buffalo nickels and nuclear missiles launched themselves towards Possum Kingdom, South Carolina. I was at a local indoor range, shooting with my business partner Mike. At the time, I knew even less than I know now, and he was our shooting expert. He had his Sig Pro 2340 .40 S&W and we were enthusiastically blowing a paper target around with the breeze from nearby misses. In fairness to our shooting skills, the target was at least 10 yards down range, so gimme a break already, will ya? Mike was shooting first, and kept hitting low and left. Bluffing like a shooting master, I ribbed him about his skills, until he told me to try his gun. When I did manage to hit paper, my shots were low and left too.

Quickly ruling out Justin Bieber as a possible cause for accuracy problems, we tried to figure out was going on, never stopping to consider the remote possibility that it might be shooter error. After some contemplation, Mike found the cause, and I readily agreed as it exonerated the both of us from an embarrassing shooting performance. Earlier, Mike had loaned his gun to a TV show production crew and the budding action star had dropped the gun during filming. Clearly this was the cause as the drop must have knocked the sights out of alignment. What else could it be?