A Litte More On Rule 1: A Gun Is Always Loaded 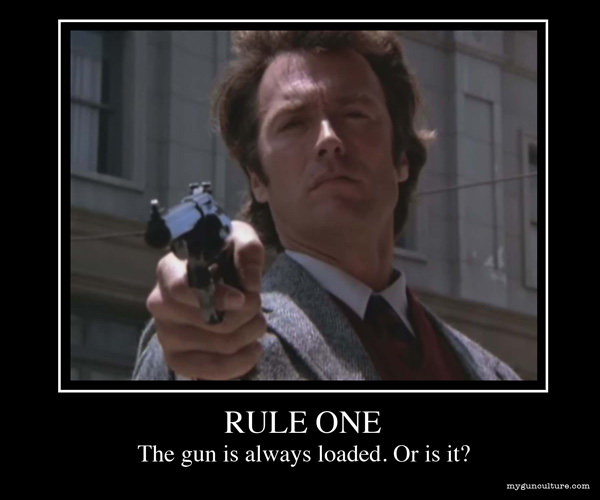 Rule 1: A Gun Is Always Loaded

Rule 1: A gun is always loaded!

Yes. Always. Even when it’s not.

Every year we hear about people who are accidentally shot with ‘unloaded’ guns.

Hopefully you won’t check out the sights by aiming it at someone.

Hopefully you won’t pull the trigger, unless you’re actually ready to fire the gun at a safe target. More on that in a minute.

And hopefully you won’t do anything else careless with it.

Rule 1 is first on the priority list, because it’s Rule 1, but also because it covers a lot of safety ground. Treating a gun like it is loaded and ready to fire has a fantastic ripple effect that makes everyone around safer.

So take it seriously. Pretend that a gun is loaded every single time you look at it or touch it. Pretty soon you’ll start believing that it IS actually loaded. Even when you look, and verify that it’s not, you’ll want to look again to make sure. This is a good thing. Never ignore a gut feeling to check the status of a gun just one more time to be sure. I like to have some fun with this when teaching new shooters the safety rules. Not for fun’s sake alone, but to really drive home the point.

Immediately after telling them Rule 1, the gun is always loaded, I pick up a gun, point it in a safe direction, and open gun’s action to show them. It’s empty of course, but I don’t tell them that. I ask them if the gun is loaded. It’s even better when both kids and adults are present in this new shooter orientation. Almost without fail, the kids look at me with an odd puzzled look for a second, then respond “Yes! It IS loaded!” Kids are much better students than adults. They love getting this trick question right! Adults tend to score about 50% on this pop quiz. About half of them look intently then tell me that the gun appears to be unloaded. We all have a quick laugh when I tell them, “WRONG! It’s ALWAYS loaded!” Then they get it.

So be creative when talking about the rules of gun safety with others. You can have fun teaching people to be safe – and just maybe they’ll tend to remember a little better!